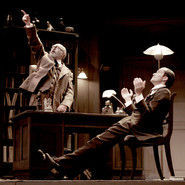 The Nazis have invaded Austria and are persecuting the Jews. Sigmund Freud is still confident in the future and refuses to leave. But on this April evening, the Gestapo arrest his daughter Anna and take her for questioning.

Freud remains alone and desperate, when, suddenly, a stranger enters through the window. The visitor, a frivolous and cynical dandy in tuxedo and top hat, has some incredible things to say. Is this merely a dream? Is he an embodiment of our perception of Freud’s subconscious? Or is he really, as he claims, God in person? Like Freud himself, each of us will have to decide, in the course of this serious, crazy evening, who this visitor really is.

Two of them told me it was brilliant but the third one said he hadn’t been in the least interested. Naturally, he was the one whose advice I followed. I buried the play at the back of a drawer without even putting a dried flower on it.

Several months later, thanks to the persistence of my two friends, thanks to the curiosity of a stage director and to the enthusiasm of a producer, The Visitor was at last put on.

The whole company believed in the play. Every time there was a break, they kept telling me how much they responded to the text and assuring me of their faith in the great stir it was going to create. I kept silent, apparently out of modesty, but really because I was cowardly and overcautious. I was sure they were all mistaken, that the play would be a flop and that in less than two months they would cross the street to avoid me.

When The Visitor opened on September 21my fears proved right. Only two people in the audience had paid for their seats: They were only interested in writing about the shows everyone wanted to see.

Only one solution was left: To begin with, it was hard to get an audience and then, when people learnt it was free, the house started to fill up. Flattering comments began to be passed around by word of mouth. Theatre professionals were carried away by the play. Drawn by the increasing rumours, journalists came and wrote wonderful reviews.

Finally, it was the turn of the TV and radio people. I was their guest in their best programmes. After two months, the house was full every night. We had become ‘the’ show everyone had to see in town.

The play is still a success in every theatre where it is on. So many different productions, so many different actors; the text holds the record for being the bestseller in contemporary theatre more than 40, copies have been sold up to now and this is just the beginning.

I was the first to be surprised. And I still am, although I have joined the ranks of those who adore The Visitor. I wrote the play in total solitude, in answer to some private need, and I thought it so intimate, so personal that I could not think it would ever be appreciated by anyone other than my most obliging friends. How can we believe in God today? How can we still believe in God in a world where horror goes hand in hand with abomination, where bombs kill and where racial discrimination is more rife than ever before?

A world in which different sorts of camps are created, some to re-educate, others to exterminate. In short, how can we believe in God at the end of the 20th century during which so many slaughters have been so methodically arranged?

How can we believe in God in the face of Evil? In philosophy, we call this ‘theodicy’ to put God on trialand we do it every day: One evening, I started weeping while I was watching the news. It was no worse than the previous evening. It was the daily procession of crimes and injustice, but that evening, I wasn’t merely trying to listen and to understand the news, I was feeling it, bleeding with my body with the whole world.

All this violence was like ear-splitting noises. I felt so depressed being a man. What can the remedy be? Whom can He go to? God lying on Freud’s couch. Then, came another one: Freud on God’s couch. The intellectual stimulus soon made me dry my tears and I began to exult. How many things God and Freud must have to say to each other given that they agree emmanul nothing!

Not an easy dialogue, since neither of the two believes in the other. The idea started to grow in me and I lived with it for several years. It finally left me when I started writing the play. Triumph was a lesson in humility. What I had presumptuously thought would only interest me, interested thousands of people. Going deep inside myself, I found, not myself, but humanity.

Sincerity is a form of humanism. To doubt, to change your mind, to pass from hope to despair, not to know is no weakness: I learnt that everyone recognizes themselves in the twists viisteur turns of The Visitor.

The Jews see the play as a Hassidic meditation; the Christians see it as some Pascalian play about a hidden God; atheists recognize their cry of despair. It also means that everyone listens to opinions that are not theirs. Whoever you are, when you see the play, you are faced with otherness. And for me, that is what matters most. Who is this visitor? God or a madman?

One of Freud’s dreams? Is the play merely the internal reflections of an old man? Everyone is at liberty to choose. My answer is no better than any other.

But you can find it if you read the text very carefully. The play clears the ground for faith but doesn’t go any further. If you do, it means that you believe. You are free to do so. But you cannot share visitwur experience. If I went beyond that threshold, The Visitor would stop being a philosophical play. It would become a propaganda play, which is what I hate most.

It would miss its aim, which is to offer something to think about as well as to feel. And, as for the friend who advised me not to publish the play, he is still close to me, even closer.

Cshmitt we’ve talked and laughed about the death he wished on The Visitor. He doesn’t say, but I know through other lw, that today, he visireur the greatest speeches of the play by heart.

Eric-Emmanuel Schmitt’s The Visitor is remarkable both for the writing andfor the players’ performances. Against a background that recreates the atmosphere of Freud’s study in Vienna, Schmitt has mixed elements of fiction with true facts from the life of the father of psychoanalysis. The action takes place in Germany has already vlsiteur Austria and the Jews are being hounded and beaten in the streets, their flats and houses sacked by the Nazis.

When the play opens, it is March 22 and Freud’s daughter, Anna, is taken away for questioning at the Metropole Hotel where the Gestapo have their headquarters. A true episode, this was to be Freud’s worst experience.

But imagination comes into play with the intrusion, through Freud’s window, of an appealing and slightly eccentric young man claiming to be God. From this moment on, the play veers between laughter and tears. The ‘pilpul ‘ 1 into which God has thrown Freud is punctuated by the tragedy xchmitt thousands of arrests and suicides and the endless comings and goings of an irresistible and crazy Nazi with a good nose for spotting Jews.

Which of the two is responsible for so much chaos? Is it God who for the love of man has granted them a total but foolish freedom, or Visjteur who, out of sheer lucidity, has always tried to convince people to become atheists?

Humour quickly prevails, however, preventing the gravity of the situation from becoming burdensome – that Jewish humour which is at once a way of life complete with a code of good manners, and an act of resistance. For example, when Freud is reluctantly about to sign a testimonial to help his family leave Austria in which he has to attest that the Nazis never ill-treated him, he adds the following words: Thierry Zalic 1 Pilpul: A dialogue between two people who apparently should never have met.

Didn’t Freud deny the existence of God throughout his life and try to prove that God was only the result of man’s deepest anxieties? What a fine duet, full of barbed remarks, suspense and irony.